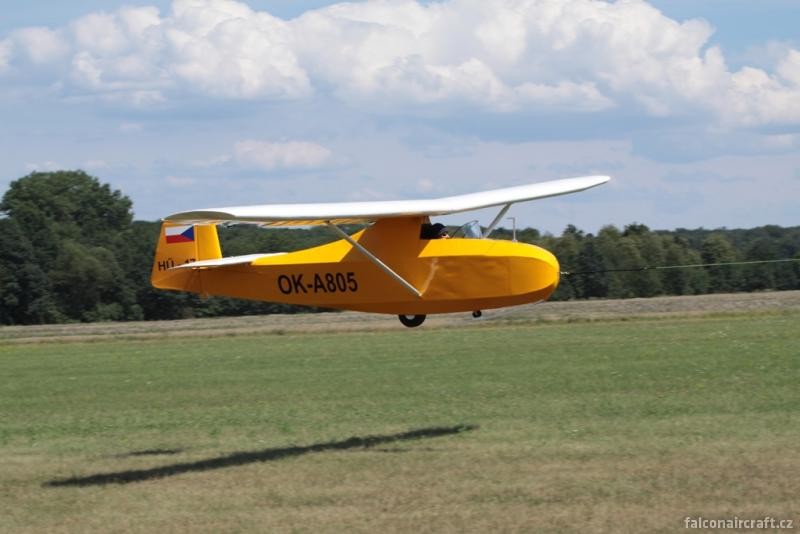 Date: 06.10.2012
This week, the renovation of our company was completed and a series of test flights of the Hütter H 17 glider was ceremoniously launched. The construction was carried out according to the original documentation, consulted with the designer Dipl.-Ing. Hut.
This little glider stood in the corner of the hangar for several years. In our opinion, it is a pity that this machine is not placed in the place where it rightfully belongs, IN THE AIR! Our company performed the replacement of steering ropes, control of the tow rope switch and complete connecting material, installation of a new front plate, minor repairs to the airframe structure and repainting of the glider. The glider will be registered by the LAA CR as an Ultralight Glider (ULK). The Glider will operate alternately at the airport in Kroměříž (LKKM) and at the Austrian airport Spitzerberg (LOAS). Retraining of fan sailors and obtaining a ULK pilot's license will be possible by agreement, for those sailors who have a standard GLD card and want to try out how sailing tasted in the 1930s ... This aircraft will conjure a smile on its face as a pilot with its flight as well as to the audience around ...
A little history:
Probably the smallest glider that has ever flown here, it was originally designed by the Hütter brothers from Austria in the years 1934-1935. The German company Schemp-Hirth produced about 600 pieces of these agile gliders, but it was also built as an amateur according to the available documentation in gliding clubs around the world. About 16 of these crickets were produced in Czechoslovakia.
Specifications:
Span: 9.7 m
Wing area: 9.2 m2
Length: 4.67 m
Profile: root: Göppingen 535, conc. margin: NACA M-6
Empty weight: 95 kg
Max Take-off weight: 210 kg
Glide 1:17 (maybe :-)